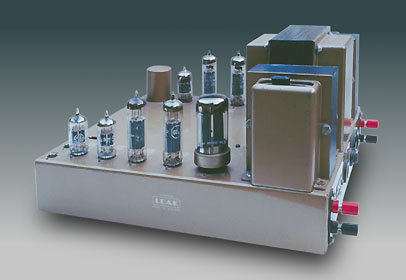 Component choice was done to balance tonal quality, and to retain the wonderful midrange purity, speed and believability of tubes in up-to-date circuits.  The total cost including labour and learning was not small, (about $Aus 2,000, or $US 1,300) but this is still a lot less than two new small tube amps would have cost me.

Two (2) rebuilt / modified Leak Stereo 20's, as a WIP they are now at Stage V.  One is in pentode (not UL) and one in triode mode. So the originality types hate me!

Swapped for a Leak Stereo 60 which I was given and did not like compared to Radfords.  Zero cost to that point!

Cost can be the only reason why HJ LEAK p/l dropped a choke from the TL12 Plus  /   Stereo 20 chassis, the value of using a tube rectifier is pretty low without one IMO, and they could have used metal diodes instead. This would have been in the same vein, being cheaper still!  Maybe not!?

I tried to stay original - Anyway, three out of 6 replacement original type caps (NoS) were no better than the crappiest I had (leaky after a few hours) ; all good GZ34’s are NoS and were very expensive and ‘no serious guarantee’.

Back then I wanted all the power I could = max HT,  so I didn’t put in a choke and stay with a tube psu.  Instead I went the ‘big cap SS’ route. Hate me if you must.

The PSU uses an array of fast soft recovery diodes (a TPC rec’dn) then big 470 uf 400 volt Ni(ppon)ch(emi)con filter capacitors, at least they fit the can and recifier holes, there are some coupling and bleed  resistors in there too!

Each amp has one cap where the GZ 34 rectifier tube usually sits, just for a laugh! The next two are in the usual can pos'ns, and the 4th goes underneath.

Each is bypassed with 1 or more WIMA  MKP and MKS. There is also an NTC thermistor on the AC in on both chassis.

The AC leads are hard wired.

They are not tweaky, hmmmm here comes a DIY braided lead experiment?

Yes, the transformer is pulsed a bit harder, but each pulse is for a lot shorter period, the 20 didn't come with a choke, so the original pulsed the TX as well!  Overall the trannie runs cooler than before, because there's no valve rectifier pulling 2 amps from the heater windings!

Thermistor surge protection / soft start, fuse sockets and new fuses all cleaned and polished.  Don't laugh this is audible, try it. Can't find the power resistor (used as a slow blow fuse by HJL). Bill must have removed it.

The input twin triode (with DC heaters and new ceramic sockets - NoS Mullard. It is flexible enough that I can use a few other tubes straight in eg. 6H30 and 6N1P.

Phase splitter/driver triodes are AWA and AWV Australian made NoS, and very good too, they’ve been in there >2 years now. 2 x Selected NOS Australian mfd (AWA/AWV) 6CG7 driver / phase splitter tubes, 1 per channel, replacing the 2 X 12AX7's. Bill has applied a FET Constant Current source circuit to this tube to hold it and the output tubes in balance. NB it is a differential stage and would need two CCS otherwise.

Note: This an extension of Mellotone (Haden Boardman's) 'Perfect Phase' rebuild (UK in HFW 2 years back), which use 12AU7 / ECC82's in both roles. (2 per amp).  [The 6CG7 is used by Audio Research, Conrad Johnson et al, and is the Noval / 9-pin miniature equivalent of the famous Octal 6SN7 Mine are AWA and AWV NoS].

Yes, I know this is probably overkill, but all three small signal tubes are just idling, which is nice.

All the coupling caps are Wima MKP's, the main circuit resistors are now 1% MFs, Beyschlag and Philips, and the cathode/bias resistors are 270 ohm non inductive power resistors (dark blue), I forget the brand. The caps and resistors tend to 'cross-compensate' the tempco effects and help the amps to settle stably once warmed up. Output power; 16 watts both channels into 8 ohm. Distortion? A lot less than 0.1%, ie 0.05%, but at 16 watts not  12 watts!.  Watts @20 hz and at 20 khz is 16. Output impedance was also down good bit.

Feed back around the input and driver stages is lower due to using a 6dj8 input and a SCG7/6FQ7 phase splitter/driver.  Took advantage of lower total and cathode feed-back in first and second triode stages, ie it's implicitly lower with the different tubes.  Overall, total feed back is maybe a bit lower and sensitivity still well below 200 millivolts for full output.

I wanted to keep 6BQ5's have replaced them with Sovtek EL84M's. I did use up a set of eight  7189's JAN NoS (I think they may have been made in Japan though,  National brand?).

I was lucky to get these for the price I did,  they are not cheap now. While the EL84M Sovteks are, and are quite OK in this role. My memory says that the Sovtek EL84 M’s are not quite as nice as NoS 7189’s!

I replaced the RCA's with good ones (Teflon ins'n). New multi-way binding posts at 3/4 inch banana / pomona centres. One chassis has nickel plated brass and the other has gold plated brass but, I still use bare wires which I dip in cleaning fluid every few months.

Tapping: You should also try two tapping options ie if it’s a nominal 8ohm spkr, dropping to 3 or even  2 ohms in places, it may perform better on the 4-ohm tap, if it’s a high impedance spkr, 16 ohms may be best but some times the 8-ohm tap is best, definitely so into a 9-11 ohm spkr. You may lose some power into a lower tap, but sometimes the bass is a little tighter.

Note: Make sure the global feedback loop is connected to the tap you're using, otherwise you'll not get all the potential benefits.

Dark gold / bronze.  They now have matching steel mesh and sheet covers. They sit on white concrete pavers (2 blocks one on top), bottom one is spiked to the floor, under a little occasional table each, ie inside the four legs.

The rebuild was a careful, thoughtful and iterative process, to audibly and measurably improve the basic circuit's achievable sound quality, and within the design's limits.  I don't agree that modern components, or even different tubes, is the wrong way to go about things. The result is more reliable, sounds better in every way and gets jaw-dropping reactions from listener's.

I had listened to them in original form; and then, Stage I, overhauled with original value parts and with new tubes, and found them (one at a time) very nice and surprisingly loud, BUT……  hissy, a bit heavy and slow in the bass and dull treble, and hummy and buzzy still.

Stage II - Sovtek EL84's and 12AX7's, much quieter but GZ34's kept failing, and good ones - ie NOS Mullards or Brimars were not cheap!  Some original filter cap's measured very ripply and leaky.

I agree with Steve, the Kiewa site's builder, that Stereo 20's mains transformers run hot, even hotter if you use lower quality GZ34's, 5AR4's, or even 5AS4's.  The 5AS4 is a directly heated tube and has a very high heater draw current.

BUT with any 'off' or cheap new tube rectifier the heater current drawn can run right up against the transformer's original design limits.   My two are the later ones with upgraded  T’s, but they still run hot.

I think the original circuit draw is close to or over 2 amps with any of these.  Way over with a 5as4.  The 'slow blow fuse' (actually a resistor), used by HJL in the 20 to protect the transformer, confirms this limitation, at least for me.  I mentioned it earlier.

The GZ37 is often suggested as an alternative, but I recall that its heater current draw is higher than a GZ34 and I think filter capacitance limits are lower still than the GZ34 family. Yes, they are rugged but I don't have room for two on each chassis!

My hum and noise problems with both my Leak ST20's were first due to the condition they were in when exchanged for a Stereo 60, I had been given, see details above! It took a while to get it back from Allen Wright, Joe Rasmussen finally found it for me. Good swap eh!

Causes? poor rectifier tubes, serially - including expensive NoS, and Chinese tubes. These latter died so quickly it was like watching the fuel gauge move on a Ford Falcon GT, just more colour and movement, like watching a mini big bang.

This did put me off them. Though I already knew that tubeophiles, like Qvortrop et al, had 'issues' with SS PSU's. Second were the filter caps, again a serial experience of leaky and noisy OEM and then NoS originalist replacements, farting buzz and hum.

I was already very wary of tube amps that farted like that. ? - barrup, BurRP baRARR... BARRA... BABOOM!!!

[Tim Casimir is the guy……   he lent me his Radford amps, a pre and one each of the two different STA power amps. He turned me on to valves / tubes.

One of them blew up very early AM. I had left them on! And that chassis also did fart occasionally. NB This was not enough to put me off tubes. Nasty and scary though it was!]

Soooo, …. , out the GZ34’s went.  BUT, I did use an array of quiet fast soft recovery diodes, snubbed,  an inrush NTC thermistor, and 3 (or 4) big caps, each bypassed with a ladder of Wima MKS and MKP's.

Bass went Bang Bang and decayed and bloomed, and shook the room, when it should. Hard headed timp sticks in HIP perf's very sudden and real. Tube bass guitar heaven, and - quiet - too.

Now I finally could do it - biamp. One stereo amp. chassis per speaker.

And damn it,  back came the hum, buzz, and hash and loss of grip at LOUD!

Tried one channel in triode, for each tweeter, less hash, clearer and sweeter, together at the same time?!

So, thought, asked, and then stopped using vertical, and went to 'horizontal'. DC heaters, a good ceramic socket for the input twin triode also helped. 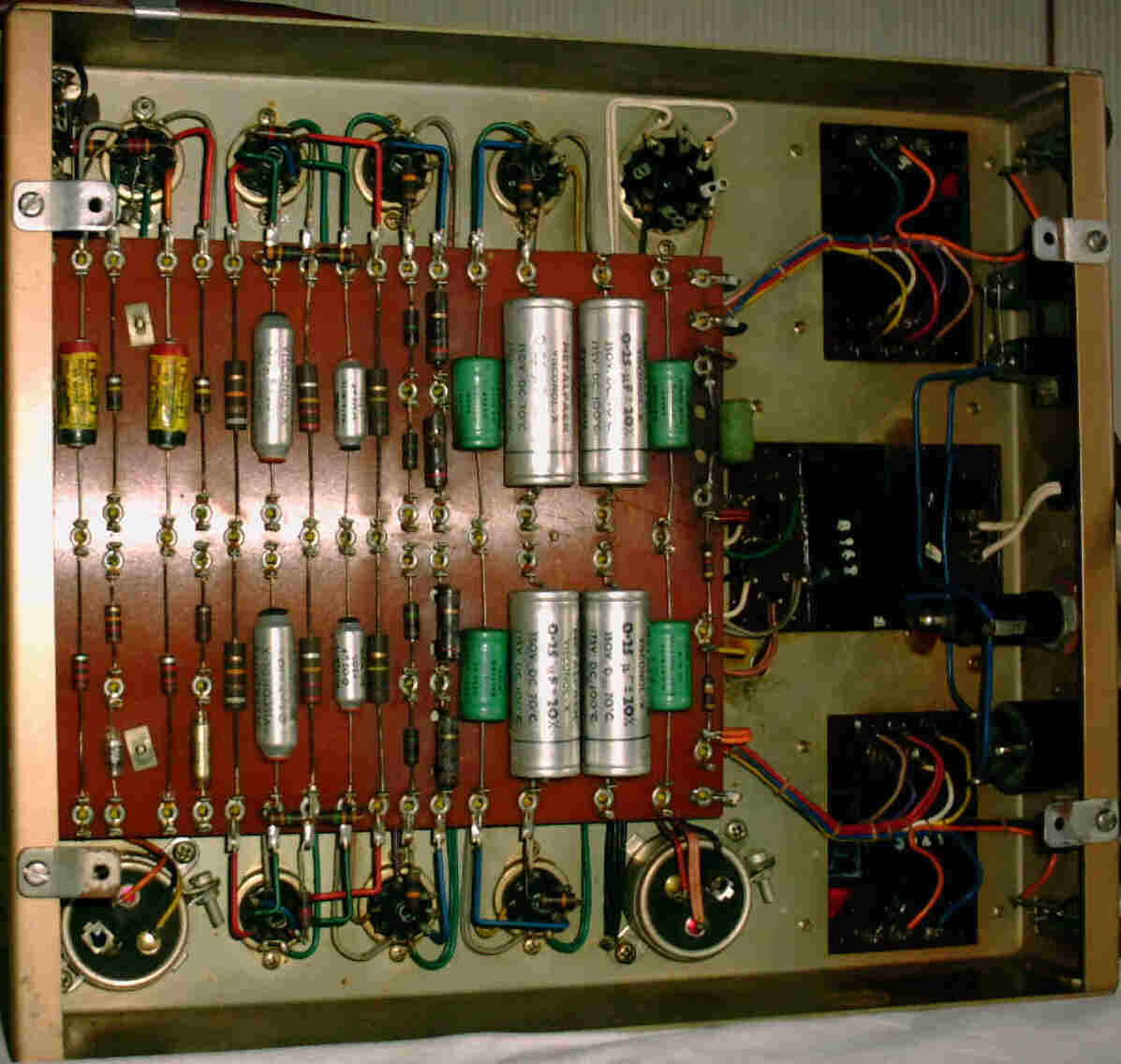 Horizontal biamping ?= One amp does stereo duty in the mid/bass, now in pentode (4 filter caps) 20wpc, yes, 20 to 20k. The other is in triode mode and does stereo tweeter duty only.

Much, much better. Theories? Less recirculation of 'earthy' currents/volts. Less overload for each leg.

NB I did run a single wire between each amp, use one neg. spkr post on each amp, it helped too Try it.

Next? a proper zero volt reference ground plane, in the PSU for the preamp, was another big help.

NB Any high impedance high gain circuit is prone to hums and buzzes from stray capacitance alone, so a bit of maintenance on leads and earth posts helps.

A real exterior ground system signal earth point is a big help too. Use thick 'earth wire' and a copper coated (at least) earth post. OZ 'soils' can be very hard so solid copper earth rods are like hen's teeth. I have three coated steel ones banged in

All work carried out, over several iterations and discussions, by Merlin Audio here in the Australian Capital Territory. I have noted all the mods on a circuit diagram, but this is a bit rough and won't scan well.