When Tannoy designed the new HF compression driver for the ceramic drivers
they should have given consideration to a slight re-design of the crossover.
Perhaps it was cost cutting rather than a technical oversight- I don't
really know.
Why on earth didn't the Tannoy engineers at the time notice the brash HF
characteristic and do something about it?

I have always found the ceramic magnet Tannoys to have a somewhat
shrill and brash HF quality which I suspect is the main reason why
many people don't like them as much as the older Alnico drivers.
Well due to some experimenting I think I may have found the reason
why.
The auto transformer/choke in the high pass section of the crossover
was originally developed for use on the older alnico drivers which
required more drive to the HF compression driver than the ceramic
magnet based drivers require.
The auto transformer/choke used in the ceramic driver crossovers is
the same as the one used in the crossovers for HPD's and Monitor
Golds.
I believe that Tannoy made a mistake by using the same auto
transformer/choke when they brought out the ceramic magnet drivers.
The main winding of the auto transformer is 4mH inductance which is
where the input is connected via a 3.3uF capacitor. The HF
compression driver is then fed from a tapping which is another 0.5mH
further up the auto transformer. This steps up the voltage fed to the
HF compression driver which is correct for driving the older alnico
drivers which have a considerably longer phase compensating multiple
throat and different shape non truly exponential HF horn.
However, the ceramic drivers which have a much shorter phase
compensating throat and more accurate exponential HF horn, appear to
require less drive. Using resistive droppers after the auto
transformer to adjust drive level is no good because the impedance of
the driver varies with frequency.
I have found that using just the 4mH main winding to feed the HF
compresion driver and not using the step up tapping considerably
improves the HF sound quality.
The ceramic driver HF now sounds very similar to an alnico HPD driver.
In fact it now sounds better with more detail without the its
previously slightly brash character.
My shattered confidence in the ceramic driver HF sound quality has
now been restored as it is capable of superb sound quality after
crossover modification.
Some time ago Lockwood Audio told me that the the 3828/3839 ceramic
magnet drivers were more accurate than the HPD series. I didn't
believe them at the time, but perhaps they were right after all. 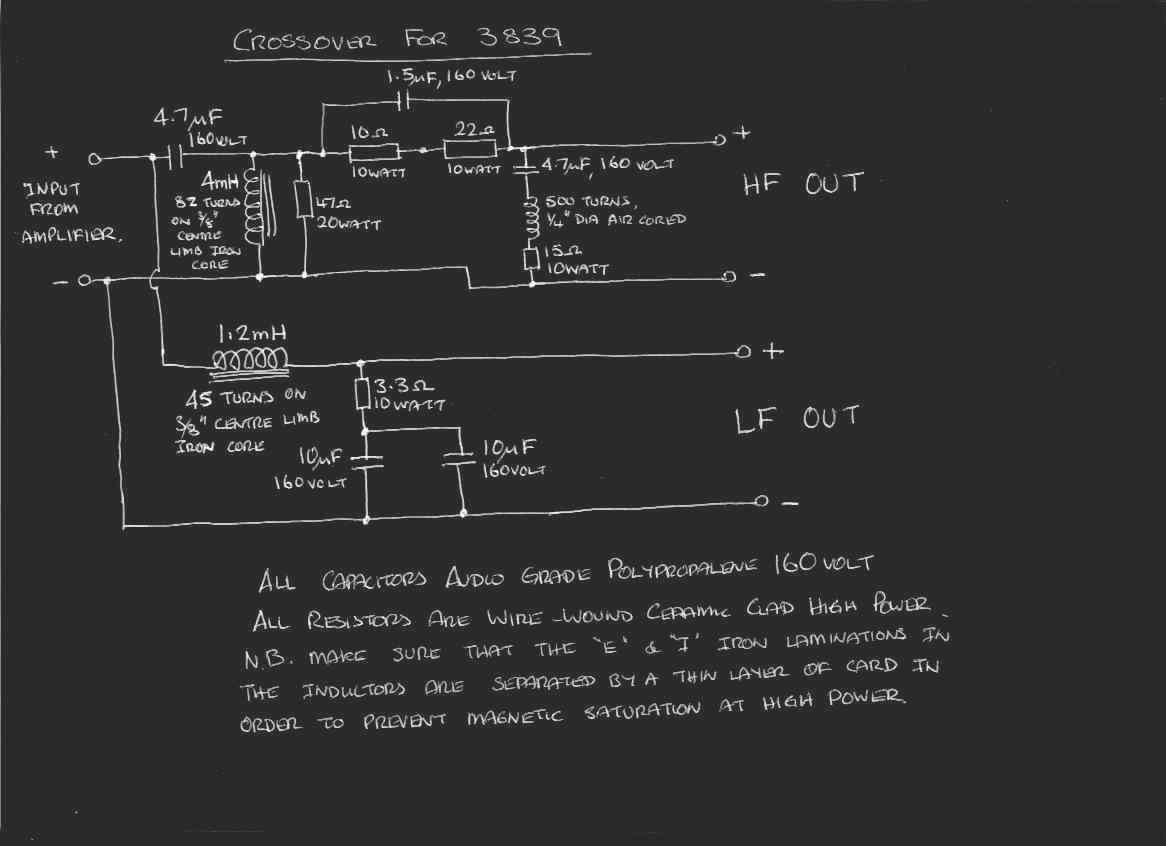 All this came about as a result of that 300 litre cabinet I built recently
and having to build my own crossovers.
Perhaps something good has resulted from my efforts!
My comments on the sound is not just from my own ears but from other people
who have experience of Tannoy speakers.
3828's and the re-coned version the 3839 can be bought second hand quite
cheaply compared to Golds, HPD's etc.

I built a crossover along the lines of the HPD385A crossover.
I used non Tannoy parts and wound my own inductors.
I have no switches and therefore no roll off or energy adjustment.
I wound a 4mH choke for the high pass section with no tappings.
I used a 4.7uF capacitor between the amplifier and the 4mH choke which then
connects to the 10 Ohm and 20 Ohm series connected resistors which feed the
HF compression tweeter. These two resistors are shunted by a 1.5uF
capacitor.
I did all this simply because I obtained two 3839 drive units without
crossovers and therefore decided to build my own.
I also used decent quality polyprop dielectric capacitors.
In the low pass section I wound a 1.2mH choke connected to two 10uF polyprop
capacitors in parallel.
I have two other 3839 drivers in Arden cabinets with the original Tannoy
crossovers and the HF sounds somewhat brash.
My home made crossovers make the 3839 drive unit sound smooth and pleasant.
I suggest that you build a crossover rather than modify the Tannoy original
crossover.
Build it hardwired on a bit of wood, spread the components out well and use
chunky wire to connect the components together. Stick all the components to
the wood using a hot glue gun so they won't vibrate.

I used 1mm cross section area enamelled copper wire for these inductors.
To get the inductance correct I used a known accurate 10uF capacitor in series with the inductor and
then connected them across an audio sweep generator.
I then used a Wayne Kerr audio analyser to observe the impedance dip at series resonance.
Knowing the capacitance value and the resonant frequency, I could then easily calculate the
inductance.
To make the inductors I took several small mains transformers apart and removed all the windings from
the bobbin.
Getting all the iron laminations out takes some effort.

Putting the new winding on the bobbin also requires some effort, and of course the winding must fit on
the bobbin to allow re-assembly of the transformer core.
On re-assembly I separated the E and I laminations with a piece of thin cardboard cut from a fag
packet.
This prevents magnetic saturation of the core at high currents, which would also cause the inductance
to dip.
The diagram shows the two paralled 10uf capacitors (to make 20uf) which are effectively in parallel
with the bass driver.
On the HF section the 4.7uF capacitor, the 500 turn air spaced inductor and the 15 ohm resistor are is
series with each other. They are then collectively in parallel with the tweeter. These components form
a series tuned circuit to notch out a resonant peak in the HF compression driver around 3KHz.
Some modern digital multi meters have an inductance measuring facility which you could use to help you
make the inductors

I originally built the crossover because I obtained two 3828 drive units without crossovers.
I knew from my pair of Mk 2 Ardens that the 3828 driver sounds somewhat brash and aggressive on some
recordings.
I always suspected that the reason for this lay within the crossover design and that the drive unit
was not to blame.
I built a 300 litre reflex cabinet with 36mm thick MDF and installed a re-coned 3828 drive unit,
driven by this crossover circuit.
The result was interesting and raises several questions about the original Tannoy crossover used with
3828/3839 drive units.
The sound quality is really nice with super HF detail without being brash.

I have not stated the wire size for the inductors because this depends on how much
room there is on the bobbin, and anyway the wire size has little effect on the inductance.
I recommend using the largest size of wire that will fit neatly on the bobbin.
The 500 turn inductor is best wound using 0.25 mm wire as large currents do not flow through it.